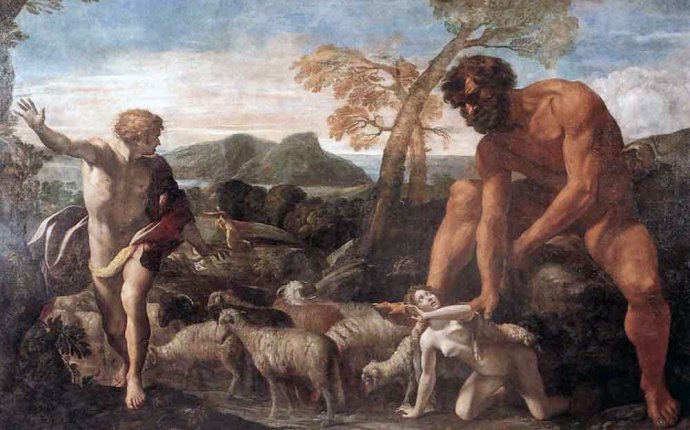 "Before there were any humans on Pallene, the story goes that a battle was fought between the gods and the giants. Traces of the giants' demise continue to be seen to this day, whenever torrents swell with rain and excessive water breaks their banks and floods the fields. They say that even now in gullies and ravines the people discover bones of immeasurable enormity, like men's carcasses but far bigger."

The ancient Greeks told stories of giants, describing them as flesh-and-blood creatures who lived and died-and whose bones could be found coming out of the ground where they were buried long ago. Indeed, even today large and surprisingly human-like bones can be found in Greece. Modern scientists understand such bones to be the remains of mammoths, mastodons, and woolly rhinoceroses that once lived in the region.

But ancient Greeks were largely unfamiliar with these massive animals, and many believed that the enormous bones they found were the remains of human-like giants. Any nonhuman traits in the bones were thought to be due to the grotesque anatomical features of giants.

At A Glance: Giant

From Paul Bunyan of American folklore to the Norse creator-god Ymir, human-like giants populate the myths of many cultures.

The Battle With the Gods

According to Greek myth, the giants were the children of Uranus (the Sky) and Gaia (the Earth) but were almost never born. Afraid the giants would be too powerful, Uranus would not allow them to be born, imprisoning them in Gaia's womb. Uncomfortable, Gaia convinced her older son Kronos to attack Uranus; he did and the blood that spilled on Gaia released the giants from their prison.

Kronos took power, but was soon overthrown by the god Zeus. The giants were enraged by the defeat of their savior and brother, and they took up trees as clubs and boulders as missiles, waging war on Zeus and the other Greek gods in an epic battle-the Gigantomachy. But the giants were ultimately defeated and buried under mountains, where their tormented shivers were said to cause earthquakes and volcanic eruptions.

The people of Tingis (modern-day Tangier, Morocco) once boasted that their city's founder was a giant named Antaeus who was buried in a mound south of town. To test the claim, Roman soldiers dug into the mound in 81 BC. Much to their surprise, an enormous skeleton surfaced-which they then reburied with great honors. Modern scientists confirm that ancient elephant fossils are common in the area.

The spectacular Giant's Causeway on the northeast coast of Ireland consists of about 40, 000 interlocking columns of basalt rock. According to Irish myth, the Irish giant Finn MacCool built the causeway so he could walk to Scotland to fight the Scottish giant Benandonner. Formations like this one are typically the result of volcanic activity. Some 65 million years ago, lava flowed over the area. As the lava cooled, it contracted, fracturing into the columns seen today.

Dwarf elephant skull: The myth of the Cyclops may have been fueled by fossil discoveries of dwarf elephants with the central nasal cavity-where the trunk was attached-mistaken for a single eye socket.

On his way home from the Trojan War, the brave adventurer Odysseus and his crew landed on the island of Sicily. Happy to find food in a cave, they gorged themselves until the cave's occupant, a ferocious cyclops named Polyphemus, returned home and began to eat the men one by one. Polyphemus soon asked Odysseus his name and he replied, "My name is Nobody." That evening, Odysseus and his men planned their escape - first they drove a stake into Polyphemus's one eye. Screaming in pain, Polyphemus called to his brother cyclopes, "Help! Nobody is hurting me!" Confused, they ignored the cries, and Polyphemus lost his only eye. In the morning, Polyphemus let his sheep out to graze after feeling along the animals' backs to make sure the men weren't riding on top. But Odysseus and his crew had tied themselves under the sheep's bellies, so they slipped by, unnoticed by the blinded cyclops.