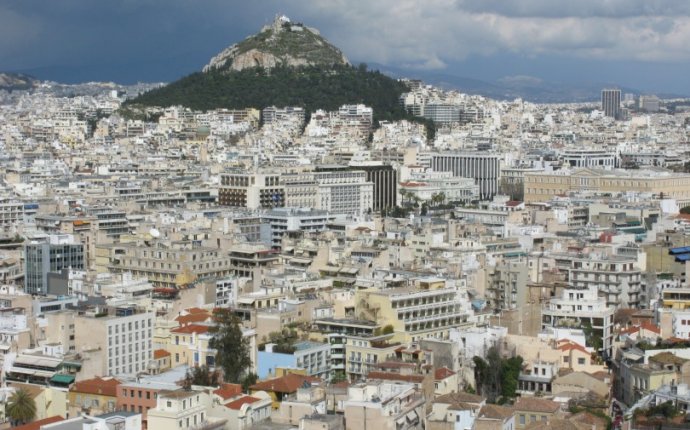 As the soil was not conducive to large-scale agricultural programs, Athens turned to trade for its livelihood and, mainly, to sea trade. The early Mycenaean period (c. 1550 - 1100 BCE) saw massive fortresses rise all over Greece, and Athens was no exception. The remains of a Mycenaean palace can still be seen today on the Acropolis. Homer's and portray the Mycenaeans as great warriors and seafaring people, and there is no doubt they traded widely throughout the Aegean and Mediterranean region. In c. 1200 BCE the Sea Peoples invaded the Greek archipelago of the Aegean from the south while, simultaneously, the Dorians came down from the north into mainland Greece. While the Sea Peoples made definite incursions into Attica (the mainland region surrounding Athens) the Dorians by-passed the city, allowing the Mycenaean culture to survive (although, like the rest of Greece, there seems to have been an economic and cultural downturn following these invasions). The Athenians, afterward, claimed for themselves a special status in that they spoke Ionian, instead of Doric, Greek and held to customs they felt were superior to their neighbors.

The wealthy aristocrats held control of both the land and the government and, in time, poorer land owners became enslaved (or nearly so) through debt to the more wealthy. Further, there was a perceived lack of consistency among the other laws of the city. The first series of laws written to address these problems were provided by the statesman Draco (also known as Dracon/Drakon) in c. 621 BCE but were considered too severe (the penalty for most infractions was death), and so the great lawgiver Solon was called upon to modify and revise them. Solon, though an aristocrat himself, created a series of laws which equalized the political power of the citizenry and, in so doing, laid the groundwork for democracy in Athens in 594 BCE. After Solon resigned from public office various factional leaders sought to seize power and the ultimate victor, Peisistratos, recognized the value of Solon's revisions and kept them, in a modified form, throughout his reign as a benevolent tyrant. His son, Hippias, continued his policies until his younger brother, Hipparkhos, was assassinated over a love affair in 514 BCE. After this Hippias instituted a reign of terror which finally culminated in the overthrow of the Peisistratid tyranny in the Athenian Revolt of 510 BCE (backed by Sparta and lead by the Spartan Kleomenes). In the aftermath of the coup, and after settling affairs with Spartan factions such as Isagoras's bid for power, Cleisthenes was appointed to reform the government and the laws and, in 507 BCE, he instituted a new form of government which today is recognized as Democracy. According to the historian Waterfield, "The pride that followed from widespread involvement in public life gave Athenians the energy to develop their city both internally and in relation to their neighbors". This new form of government would provide the stability necessary to make Athens the cultural and intellectual center of the ancient world; a reputation which lasts even into the modern age.

After the Athenians (with the help of Plataeans) defeated the Persians at the Battle of Marathon in 490 BCE and, again, after driving off a second Persian invasion at Salamis in 480 BCE (and soundly defeating the Persians at Plataea and Mycale in 479 BCE), Athens emerged as the supreme naval power in Greece. They formed the Delian League, ostensibly to create a cohesive Greek network among city-states to ward off further Persian attacks, and, under the leadership of Pericles, grew so powerful that the Athenian Empire could effectively dictate the laws, customs, and trade of all her neighbors in Attica and the islands of the Aegean. The historian Waterfield writes:

There is no little irony in the fact that one of the things we most admire in the ancient Greeks is their love of freedom - and yet one of the chief manifestations of that love was their constant striving to control in some way the futures of their neighbors.

Even so, under Pericles, Athens entered her golden age and great thinkers, writers, and artists flourished in the city. Herodotus, the `father of history', lived and wrote in Athens. Socrates, the `father of philosophy', taught in the marketplace. Hippocrates, `the father of medicine', practiced there. The sculptor Phidias created his great works for the Parthenon on the Acropolis and the Temple of Zeus at Olympia. Democritus envisioned an atomic universe. Aeschylus, Euripedes, Aristophanes, and Sophocles wrote their famous plays and Pindar his Odes. This legacy would continue as, later, Plato would found his Academy outside the walls of Athens in 385 BCE and, later, Aristotle's Lyceum would be founded in the city centre.

The might of the Athenian Empire encouraged an arrogance in the policy makers of the day which grew intolerable to her neighbors. When Athens sent troops to help Sparta put down a Helot rebellion, the Spartans refused the gesture and sent the Athenian force back home in dishonor, thus provoking the war which had long been brewing. Later, when Athens sent their fleet to help defend its ally Cocyra (Corfu) against a Corinthian invasion during the Battle of Sybota in 433 BCE, their action was interpreted by Sparta as aggression instead of assistance, as Corinth was an ally of Sparta.

@Simmermoanne: tfw Athens is the most backward city in the entirety of Ancient fucking Greece when it comes to women rights.