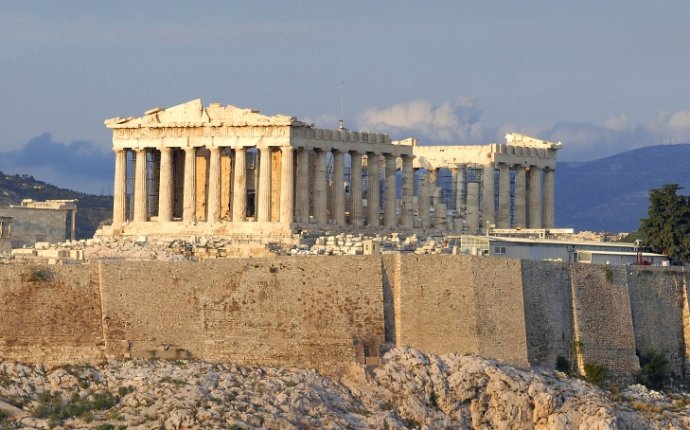 Athens was named according to the Greek mythology from competition that the goddess Athena had with Poseidon about who will become protector of the city. The myth says that Poseidon gave a spring with sea water whilst Athena offered an olive tree as she touched the ground of the sacred rock of the Acropolis. The people of Athens choose Athena as their protector and so the city was named after the goddess of wisdom. The myth is symbolic but the two Gods symbolising the strength of Athens as a city of wisdom and as a sea power. The first settlement of Athens 3000 BC was situated on the rock of Acropolis.

According to the tradition, Athens was founded, when the king united in a state several settlements of Attica. The last king of ancient Athens was Kodros, who sacrificed his life in order to save the homeland. Later came to power the nobles (wealthy landowners). The nobles ruled Athens by their consul the Supreme Court (Arios Pagos), from this consul where elected the 9 rulers of Athens . During this time was existed the assembly of the Athenian citizens (Ecclesia of Demos) but during this period did't had the power that had later with the lows of Solon.
After the the period of colonisation and expansion of trade, many citizens of Athens became rich and wealthy from the trade and shipping, and they wished to participate in the administration of the state, while from the other hand the lower classes of the city where facing poverty. This fact resulted riots between the poor who wanted land and new lows with more social justice and the nobles that wanted to keep their power and authority.
Those riots tried to exploit the ambitious Kylon aiming to become a tyrant, but he failed. His movement stayed in history as 'Kylonion Agos'. After this, the nobles tasked Drakon to write new laws in response to peoples demand. But the laws of Dracon were too hard and peremptory and thus disappointed the Athenians.
As the laws of Dracon did not meet the expectations of the people of Athens who they tasked Solon, which was considered as a very wise man, to write new laws.
gave back the debts of the citizens and let free all those who had been slaves from their debts. That law, because released the people of Athens from a very heavy burden, was named 'seisachtheia'
Solon split the Athenians into four classes, depending on their income. Archons (rulers) had the right to become only the rich. But, Solon strengthened politically and the poor, because he gave the great strength to the Ecclesia of Demos, namely, the assembly of citizens. The assembly decided on all major issues and was voting the laws which were prepared by the House of the four hundred. Solon founded the large peoples court, the Iliaia. Those where the first steps towards democracy.
But even the laws of Solon reassured the Athenians. The poor wanted reframing, namely re-division of the land. During this period the nobility lost much of their old power and Peisistratos managed to gain the support of many people and become a tyrant.
Peisistratos supported the farmers and produced numerous projects in Athens. His sons and successors, however, Hippias and Hipparchos, were hard to the Athenians and had no happy ending. Hippias escaped to Persia, where he died in exile and Hipparchos was killed by the Athenians.

RT @AthensWalking: Wander through the streets of #Athens with me & discover my city as we take a cultural trip back to its glorious #histor…