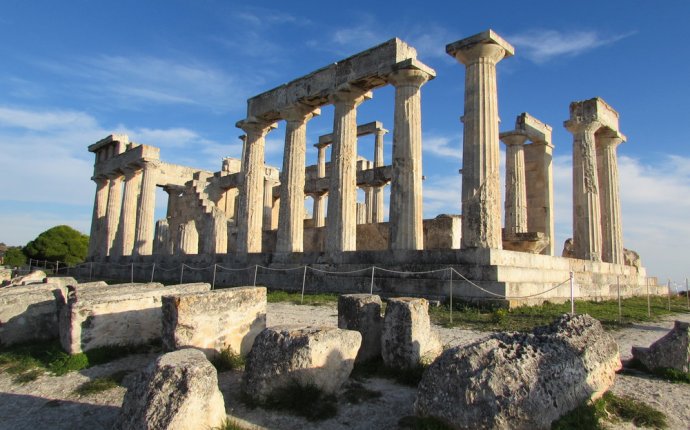 Situated on the narrow isthmus that joins the Peloponnesus to mainland Greece, the ancient city of Corinth has been undergoing excavation since 1892. The Greek city thrived for millennia before the Romans razed it in 146 B.C., and then prospered again after it was rebuilt a century later under orders from Julius Caesar. Archeological finds at the site span many centuries and range from beautiful examples of ancient Greek pottery to colorful Roman mosaics. The site’s star attractions include the remains of a classically Greek temple to Apollo that dates back to the 6th century B.C. and the Bema platform from which St. Paul orated before the Roman governor in 52 A.D.

The island of Aegina’s close proximity to Athens makes it a popular destination for local and tourists alike. Hydrofoil ferries from Piraeus whisk visitors to Aegina in just 40 minutes. Famed for its pretty beaches and pistachio orchards, Aegina also has several important ruins that reflect the island’s wealth and importance as a maritime power in the 7th and 6th centuries B.C. The artfully designed Temple of Aphaea became a favorite subject among Neoclassical and Romantic artists in the 19th century who considered the temple’s beauty on par with the Parthenon in Athens. Excavated artifacts from the site are on display at the Aegina Archaeological Museum.

Characters from Homer’s tales of the Trojan War seem to come to life at ancient Mycenae located southwest of Athens. First excavated by German archaeologist Heinrich Schliemann in 1874, the ruins of a hilltop citadel were once the Bronze Age home of the fabled Agamemnon and his wife Clytemnestra. While the golden treasures of Mycenae have been removed to the National Archaeological Museum in Athens, visitors can still walk through the famous Lion’s Gate, climb into the site’s secret cistern and explore the royal tholos tombs, giant beehive-shaped stone structures built between 1500 and 1650 B.C.

A grand open-air theater is the main sight in the municipality of Epidaurus. Nestled among rolling hills, the 14, 000-seat amphitheater dates back to the 4th century B.C. The theater’s acoustics are so perfect that it is still considered a prime venue for dramatic productions today. Epidaurus is also notable for the Temple of Asklepios located north of the theater. One of the most famous healing centers of the ancient world, patients would spend the night in the great sleeping hall, waiting for the healing god to visit them in their dreams. The sanctuary includes remnants of Greek baths, physician rooms and an expansive gymnasium.