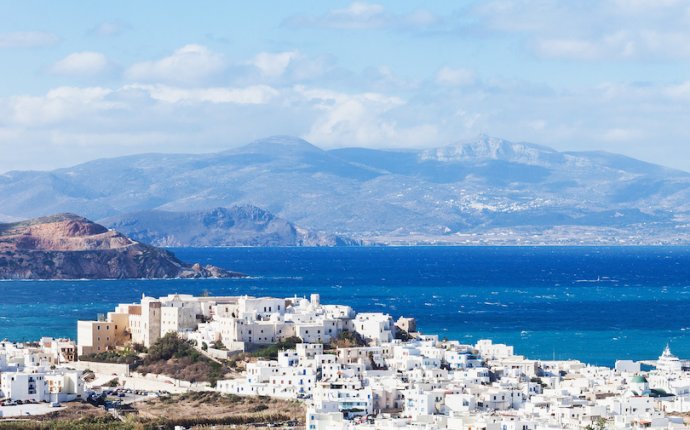 While it’s easy to spend an entire Mykonos vacation on the beach, an inland excursion to Ano Mera can’t be missed. The village of Ano Mera was built around a 16th Century monastery called the Panagia Tourliani. The restored monastery, with its statuesque bell town and marble fountain, can be toured daily. Inside the monastery there is a collection of Byzantine relics for viewing, and the marble-tiled area around the monastery is home to several souvenir shops and restaurants. Nearby to Ano Mera there is an even older monastery, the Monastery of Paleokastro, as well as the ruins of a Byzantine castle.

Those looking for a more relaxing beach experience can head to the northern side of Mykonos, where a cozy bay forms Panormos Beach, and a cove protects the area from high winds. Less developed and harder to reach than the other beaches, Panormos Beach has fewer accommodations and fewer visitors. The quiet beauty of this beach does attract a regular crowd that enjoys the beach volleyball area and the shaded taverna. Stroll along the white sand or enjoy a walk in the surrounding countryside.

Historic religious sites on Mykonos can also be found along the coastline, and Panagia Paraportiani is one of them. Located at the entrance to the Kastro neighborhood of Chora, the whitewashed walls of this seaside church form a unique shape due to the building’s unusual construction. Five small churches that were built on top of each other beginning in the 14th Century became the Panagia Paraportiani that can be seen today. The asymmetrical shape and rare combination of architectural styles combined with the ocean view have helped to make Panagia Paraportiani one of the most photographed sites in the world.

Elia Beach is the longest beach on Mykonos. Less crowded and more laid back than the party beaches, Elia Beach is accessible by bus service from Mykonos Town and boat service from Platis Gialos. You can find watersport rentals, restaurants, bars and hotels dotted along the shore. On the fine-sand beach, the relaxed atmosphere is characterized by the beachgoers resting under cabanas or wading in the clear blue ocean.

On the south side of Mykonos lies Platys Gialos Beach, a family-friendly beach where numerous hotels are located. Hotel guests staying on Platys Gialos can walk directly from their rooms to the beach to relax on a sunbed or enjoy watersports. Platys Gialos is also a mini travel hub where taxi-boats depart regularly for the island’s other famous beaches. Located just a short distance from the main town of Chora, Platys Gialos Beach lies in a picturesque half-moon bay. Along the beach there is an abundance of Greek and Italian restaurants as well as cheap and delicious Mediterranean take-away.

No trip to Mykonos is complete without a visit to Paradise Beach, one of the most popular party spots in all of Greece and home to the island’s largest nightclub. Known for its nonstop beach parties, Paradise Beach frequently hosts world-famous DJs who entertain guests at the massively popular open-air nightclub, Paradise Beach Club. During the day, several open-air lounges on Paradise Beach serve cocktails to beachgoers while they relax beneath grass-roofed cabanas and umbrellas.

Kato Mili, or the “lower windmills” in Greek, is a row of historic windmills that stand facing the sea in the town of Chora. A defining feature of the Mykonos landscape, the wood-and-straw capped windmills were first constructed in the 16th Century by the Venetians. Today, the preserved windmills are iconic relics that have been converted to museums and are among the most popular attractions in Mykonos. There are currently 16 windmills on Mykonos of which 7 are situated on the famous landmark hill in Chora. Visit the windmills to see how the Venetians harnessed the power of the wind, and enjoy a panoramic view of the town and ocean.

Mykonos makes a great home base for a short trip to the island of Delos, the birth place of Apollo and Artemis in Greek legend. Delos is uninhabited, and daily ferries can take you there from Mykonos for the chance to explore the ruins. The island’s top sights include the Sacred Harbor, now a dry lake; the Terrace of the Lions, Cleopatra’s House, and the House of Dionysius, a luxury private home built in the second century. Delos also boasts a museum filled with Greek sculptures and vases as well as a small cafe.