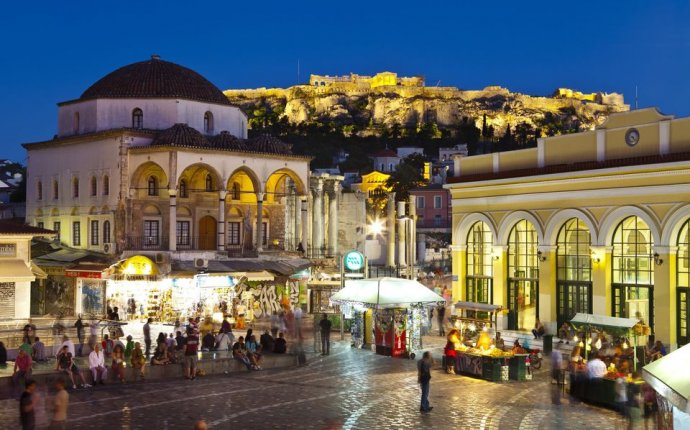 Few sights in the world compare to Athen's Acropolis, with its Parthenon temple perched high on a rocky crag keeping watch over centuries of civilization. A reminder of the glory of ancient Athens, the Acropolis was the center of the ancient city and functioned as a citadel in its protected hilltop location. The most emblematic building is the Parthenon, the largest temple of the classical antiquity period dating from 447 BC to 338 BC. With its monumental rows of Doric columns and stunning sculptural details, the temple is an awe-inspiring sight. In the frieze on the eastern side, reliefs depict the birth of the goddess Athena. Other ruins of the Acropolis include the Erechtheion, a complex of ancient sanctuaries built between 421 BC and 395 BC. The most famous feature of the Erechtheion complex is the Porch of the Caryatids, with six statues of maidens in place of Doric columns.

Be sure to also visit the Acropolis Museum at 15 Dionysiou Areopagitou Street, below the Acropolis hilltop. This museum contains one of the most valuable collections of ancient Greek art in the world. Also nearby are two interesting neighborhoods, Plaka and Anafiotika, charming areas to stop for a meal and stroll around the picturesque pedestrian streets.

Founded in the 19th century, Athens' National Archaeological Museum is the largest archaeological museum in Greece and one of the greatest antiquities museums in the world. The museum is housed in an impressive Neoclassical building with 8, 000 square meters of exhibition space. On display are five permanent collections with more than 11, 000 exhibits, offering a comprehensive overview of Greek civilization from prehistory through the classical period to late antiquity. The Prehistoric Collection covers the sixth millennium BC to 1050 BC (the Neolithic, Cycladic, and Mycenaean periods) and presents findings from the prehistoric settlement at Thera. The Sculpture Collection exhibits ancient Greek sculptures from the sixth century BC to the fifth century BC, including rare masterpieces. The Vase and Decorative Objects Collection showcases ancient Greek pottery from the 11th century BC all the way until the classical Roman period. The Stathatos Collection features minor objects from a wide range of historical periods. Exquisite little statues and figurines sculpted from metals are on display in the Metallurgy Collection.

This interesting museum offers fascinating insights into the Byzantine period of Greek history. Housed in a 19th-century palace originally built for the Duchesse de Plaisance, the wife of Charles-François Lebrun of France, the museum displays a precious collection of Byzantine art. The Byzantine Empire was the inheritance of the eastern half of the Roman Empire after it fell; the expansive empire was officially Orthodox Christian in religion and Greek speaking. From the third century to the 15th century, the Byzantine Empire ruled over the land of what is now the Balkans, Greece, and Asia Minor. During this time, religious art was highly valued. Byzantine artists created masterpieces of detailed glittering mosaics and gilded icons.

With more than 25, 000 artifacts on display, the Byzantine Museum is a treasury of religious artifacts from the Byzantine period as well as pieces from the early Christian, medieval, and post-Byzantine eras. The collection includes sculptures, paintings, icons, textiles, and mosaics. Highlights are the architectural fragments from early Christian basilicas and Byzantine churches and the reproduction of a fountain depicted at the Monastery of Dafní. The museum's courtyard features a splendid fragment of a mosaic floor from the fifth century.

4 Agora: Ruins of the Ancient Marketplace

Agora: Ruins of the Ancient Marketplace

The ancient Agora was the marketplace and the center of everyday life in ancient Athens. For an impressive view of the Agora from afar, head to the north wall of the Acropolis or the roads from the Areopagus. The best place to enter the Agora is at the north gate off Adrianoú Street (near the Church of Saint Philip). The Greek word "Agora" means to "gather and orate, " indicating that this site was a location of public speaking. The Agora was a place of administration and commerce as well as the meeting place of the Agora tou Dimou, a civic decision-making group. Athletic events and theater performances were also held here. One particularly interesting feature of the Agora is the 18-meter-long Royal Stoa, the seat of the Archon Basileus, who took over the cultic functions of the earlier kings. This sixth-century BC stoa may have been the scene of Socrates' trial in 399 BC.

From the Agora, tourists can take a pleasant walk along the footpath that leads up the Agora Hill (Kolonos Agoraios). On the hilltop at 24 Andrianou Street is an awe-inspiring sight, the Temple of Hephaistos. This fifth-century BC Doric temple is one of the best-preserved ancient Greek temples, thanks to its conversion into a Christian church, which saved it from destruction. The temple was designed on a classical plan with six rows of 13 columns, and the Ionic friezes appear to be modeled on the Parthenon. Across from the Roman Agora, only 16 meters away, is the site of the ancient Library of Hadrian, a complex of buildings founded by Emperor Hadrian after AD 132.

In the Kolonáki quarter, the Museum of Cycladic Art was created in 1986 by the Nicholas and Dolly Goulandris Foundation. The shipowner Nikolas P. Goulandris was a well-known patron of the arts and cultural life in Athens. Goulandris' own collection forms the core of the museum's exhibits. Housed in a sleek modern building with a facade of marble and glass, the museum's permanent collection includes more than 3, 000 objects. The collection represents ancient Greek art, ancient art of the Cyclades (the islands in the Aegean Sea encircling the Island of Delos near Mykonos), and Cypriot art (from the island of Cyprus) dating from the fourth century BC to the sixth century AD. Many of the artifacts on display date to the sixth century BC. Temporary exhibits are held at the elegant 19th-century Stathatos Mansion, accessible from the main building by a passageway from the atrium.

6 Church of the Holy Apostles

Church of the Holy Apostles

On the site of the ancient Agora, the Church of the Holy Apostles was the only building left standing when this entire quarter of Athens was demolished to excavate the Agora archaeological site. Built in the 10th century, the church stands above a nymphaion (sacred spring). The exterior is notable for its ashlar masonry and its ornamental Kufic (a style of Arabic script) inscriptions. Typical of Byzantine architecture, the church has a dome supported on four columns, and the apse and transepts feature semicircular conches. The interior of the dome is adorned with original frescoes depicting Christ Pantocrator (Ruler of All), John the Baptist, adorable little cherubim, and archangels. Much of the original 11th-century iconostasis (wall of icons and religious paintings) has also been well preserved.

How much marketing make? How many interview questions in 45 minutes? How much intelligence does a cat have? Where to learn object oriented programming? Where work definition? How much does a career get paid? When meaning in hindi? Whom them? Where to import cheap clothes? Who leadership and management in nursing? Where to put leadership on resume? What object is 8 inches? What generation am i? Skills where to start? When object is at infinity? How leadership actually works? Nowhere generation? Why math is fun? How meaning in tamil? How subject should be taught? Where is fez from theory? When create gmail account? Why recruiter asking for pan card? Where algorithm come from? Who is maintenance officer? How often does imperial workshop restock? What important event happened today? How much machine operator earn? How often is the challenge on? Where to find favorite lenses on snapchat? Whom may? What overcome jealousy? How degree is calculated? What important events happened in august? Whose architect and builder is god? Which algorithm creates a message digest? How much important you are to me? Is there an algorithm for everything? When transfer window close? When leadership is toxic? How many research hours for medical school? How many summarize written text in pte? What machine works glutes? Where to construct architect body? Jjc skillz? Whom i support? Which internet speed do i need? Who uses machine learning? Who main activities? Why influence other countries music? Whose genes determine intelligence? What developer to use? How many leaders have resigned? Who skill definition? Where to find career counselor? How leadership actually works? How much internet does youtube use? Which marketing job pays the most? Who blogs anymore? Who career login? Where architects are in demand? Where to service mercedes benz? Whom def? How long transfer between banks? Who example relative pronoun? How often does the leadership conference happen? When create youtube? When improvement exam held 2022 fbise? Whom synonym? Where to find architect artifact q59? When working with track changes what is the difference? How often work out arms? Where's summary tab on itunes? Which is opportunity cost in economics? Which important documents to keep? What math is on the act? Why grow alfalfa? When subject or object? Where does subject line go in a letter? What is common classification? What facility to buy for doomsday heist? Where users folder mac? Who algorithm for covid 19? How career planning is important? How far plant tree from house? Where to get influence stellaris? When examples sentences? When answers aren't enough piano chords? Which your favorite animal? How much industrial piercing? When subject matter jurisdiction? How many working days are there in a year? When blogging became problematic? Which generation ipad is the newest? How many grow lights per outlet? Why skills are important in life? How much maintenance is a pool? Who degree of hearing loss? How opportunity cost is related to choice? How much plot cost? How leadership works? Where opportunity knox?
Source: www.planetware.com