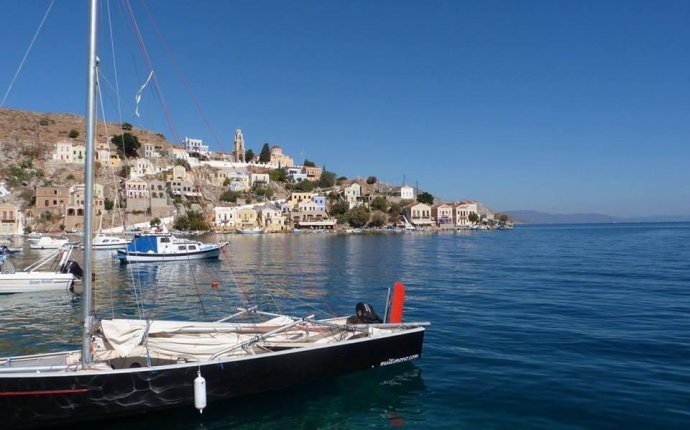 This is a tale of two holidays, set on an island with two very different shores. It's about reality and what you make of it. And it begins, with the deliberate ambiguity provided by inverted commas, in a "village" on Rhodes, out in the Aegean Sea.

There are plenty of no-mucking-around, caveat-free villages on Rhodes, which at 80km long and 38km wide is the largest island in Greece's Dodecanese group. Take Asklipio, for example, which lies south-west of the dramatic coastal town of Lindos. It has a spattering of flat-roofed whitewashed houses, a couple of tavernas (called Agapitos and Nikolas) in the main square, and a ruined medieval castle plonked on the hill up above.

The village is reputed to be the birthplace of Aesculapius, the Greek god of healing, but Asklipio is happy to mix its myths: a pretty Byzantine church contains 15th-century frescos that offer the Christian version of events. Locals potter about on scooters, and tourists occasionally roar up on quad bikes to admire the view out over the green valley, which is speckled with olive trees. It's hot here, but not bothered. And it feels pretty real, in a rural, Greek sort of way.

But our holiday started out in a rather different sort of village. The First Choice Holiday Village Rhodes opened for business at the beginning of May. It is the eighth such all-inclusive resort offered by the group (others can be found in Egypt, Cyprus, Turkey, the Costa del Sol, the Algarve, Lanzarote and Mallorca), and the first to be badged with First Choice's top-of-the-heap "five sun" rating. Reality is a little different here. The castle has flumes coming out of the top of it, for a start.

Now, the Greeks have been fretting about this sort of thing for a long time. Not castles with flumes – although they may well be cause for concern. No: reality. Plato goes big on it in The Republic, with the Allegory of the Cave. The premise is that a group of people are chained facing the wall of a cave for their entire lives looking at shadows, which from their point of view constitute reality. Then one of them breaks free and discovers that the shadows are in fact just that, and realises that reality is different from that which he'd thought it was. So the things we sense aren't really real, ideas are what count, and – yes – philosophers should get out more, possibly to somewhere with a nice taverna, or indeed a flume.

Let's be clear. I'm not saying that visiting the First Choice Holiday Village Rhodes is like being chained up in a cave. Quite the reverse: it provides an alternative holiday reality, separate from the version that I'd previously understood to exist. Because the key thing about Holiday Villages is they are aimed at families who want to go on holiday together, rather than parents who want to bore their children with Byzantine frescos. At eight and five years old respectively, Jamie and Pete had waited long enough for this moment, and their excitement was palpable.

The hotel is set in the resort town of Kolymbia, just south of Faliraki, which gained infamy in the 1990s for the mayhem imported by young, drunken Brits on cheap package holidays. These days things have quietened down. Families are drawn to Faliraki for a vast Water Park and a sweep of sandy beach. Kolymbia, meanwhile, is divided up by streets named after European capitals (Athens, Berlin, Helsinki, Lisbon) and has a more pebbly beach than Faliraki's, hemmed by cliffs. There are shops selling inflatable dolphins, and bars with crazy golf courses. But it's quite possible to visit Holiday Village Rhodes without paying attention to any of this stuff, because families will find almost everything they need for a holiday just beyond reception. The clue's in the name.

This is a village of three areas: Activity, Relax and Royal Deluxe. Largest by far is the Activity area, where the entertainment takes place. Here a covered stage dominates the site, with evening performances including child-friendly shows as well as bingo sessions, tribute bands and the like. The waterpark also provides a daytime focus for children; the castle and its flumes can be found here, as well as – for added incongruity – a pirate ship with smaller flumes, and a lazy river, which involves bobbing around on giant inflatable doughnuts.

The accommodation, with the exception of some standard rooms set above the main reception building, is in two-storey red-roofed blocks clustered around large curving pools; many of the rooms are "swim up", which means you can take to the waters from your own personal sun-lounger. The Relax and Royal Deluxe areas comprise their own section on an adjoining lot. Relaxers get a swim-up bar, while the Royal Deluxe area has its own restaurant and the adults-only Pearl Clubhouse Bar. (Local spirits are included in the all-inclusive package; I can recommend the house cocktail, but not in large quantities.)

Ignore the business with the pirate ship; it's all done very tastefully. The public areas are light and spacious, with plenty of smart design accents, from lattice-work chairs to gauze-covered chandeliers. Our Royal Deluxe family room was a study in modern, muted décor, albeit designed to be robust, with lots of laminated wood in evidence. The double bed was separated from the boys' single beds by a wooden screen that slid aside to create one large room, and louvred wooden shutter doors gave us all some privacy from the main pool area. There were two flat-screen TVs to choose from as well, but they were never turned on, for the simple reason that there was just too much to do.

The facilities seem, at first glance, to be endless. To start with, there are courts for basketball, volleyball and tennis, and a small Astroturfed football pitch. There's also a high-ropes course (Jamie's favourite part of the resort) where the over-sixes tackle a series of tyre- and plank-based obstacles over a 40ft drop while being attached to life-preserving lanyards. For adults, there's a sleek underground spa, with a salt-water pool, Jacuzzis and a nine-hour "Sense of Body Shape" treatment available for €390, as well as less extreme forms of paid-for pampering. And for children and adults alike, there are free activities scheduled throughout the day, from learning to snorkel to short-mat boules, petanque and something called Aeroball, which resembles an improbable cross between trampolining and basketball.

There's plenty of all-inclusive food and drink on offer, too, with beer and wine on tap (literally – it's like having a never-ending wine-box to guzzle) in the main buffet restaurant. Buffets are, I discovered, a stupendously good way to feed children, as there's no tedious fiddling about with menus and waiting for waiters. What's more, the Greeks, once they'd sorted out all that business with reality and the cave, clearly concentrated on more important stuff, like dips. So there's lots of tzatziki and taramasalata, as well as rolled vine leaves, moussaka and Mediterranean favourites such as houmous and baba ganoush.