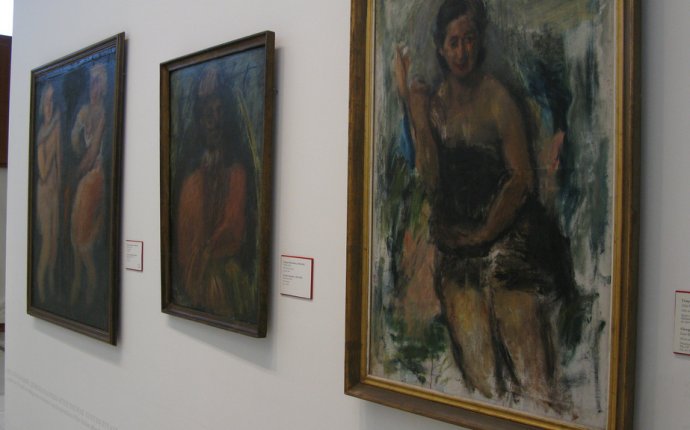 The Macedonian king wears a royal diadem in his wavy hair, and a short cloak (chlamys), cuirass, and laced military sandals. He once brandished a sword in one hand, while the other grasped the reins of his rearing horse, presumably his favorite, Bucephalus (Bull Head). Found in 1761 in Herculaneum in Italy, the statuette is thought to be a small-scale replica of a lost monumental sculpture that Lysippos created in celebration of Alexander's victory over the Persians in 334 BC.

Alexander on Horseback, 100 - 1 BC; bronze, copper, and silver. Lent by the The National Archaeological Museum, Naples (MANN).

The gesture of Aule Meteli's upraised hand, interpreted as a request for silence before starting a public speech, demonstrated the ability of bronze - stronger and lighter than marble - to render dynamic poses without support. The figure wears a Roman toga, with a red copper stripe on his tunic, but the inscription that names him on the border of his garment is written in the language of the Etruscans. An ancient people in the region of present-day Tuscany and Umbria, the Etruscans had close ties to Greece and Greek colonies in southern Italy and were eventually assimilated into the Roman Republic.

Portrait of Aule Meteli ("The Orator"), 125 - 100 BC; bronze and copper. Lent by Soprintendenza per i Beni Archeologici della Toscana (Museo Archeologico Nazionale, Firenze).

Excavated in 1861 near the Temple of Apollo at Cyrene along with fragments of a gilt-bronze horse, this head represents an indigenous Libyan or Berber. High cheekbones, crow's-feet at the eyes, and a short beard contribute to the portrait's realism and indicate the interest of Hellenistic sculptors in accurately portraying foreign peoples. The lips, inset with copper (now tarnished), are parted slightly to reveal bone teeth; the inlaid eyes, outlined with copper lashes, preserve traces of white enamel.

Portrait of a North African Man, c. 300 - 150 BC; bronze, copper, enamel, and bone. Lent by the Trustees of the British Museum, London.

The brother-in-law of Julius Caesar, Piso Pontifex (48 BC - AD 32) was a highly cultured member of the Roman elite (the ancient poet Horace dedicated a treatise to him). He was also the son of the reputed owner of the luxurious Villa dei Papiri at Herculaneum, destroyed by the eruption of Mount Vesuvius in AD 79 but famous for its collection of bronze and marble sculptures excavated in the 1750s. This likeness harks back to portraiture of the Roman Republic that embodied the virtues of severitas (strictness) and gravitas (dignity), but its expressive power is distinctive of Hellenistic sculpture.

This highly individualized likeness epitomizes the realism that Greek artists achieved in the Hellenistic period. Once part of a full-length statue, the head turns slightly to one side, enhancing the pathos of the man's concerned expression. Both inserted eyes are preserved, giving a vivid impression of the original appearance of portraits that have lost them. The man's identity is unknown, but such details as the soft, rolling flesh, furrowed brow, and crow's-feet leave no doubt that this sculpture represents a specific individual. The original statue was likely an honorific portrait of a citizen displayed in the palaistra, a training ground for athletes, where this head was found on the Greek island of Delos in 1912.

Portrait of a Man, c. 100 BC; bronze, copper, glass, and stone. Lent by the Hellenic Ministry of Culture, Education, and Religious Affairs, The National Archaeological Museum, Athens.

Wearing a long cloak that envelops both arms and hands, and elaborate sandals, this figure was discovered in 1958 along the beach of Hierapetra on the Greek island of Crete. The boy's sober, almost melancholy expression, corresponds with his solemn, dignified pose. Executed fully in the round, the stuatue may come from a funerary monument.

Portrait of a Boy, 100 - 50 BC; bronze and copper. Lent by the Hellenic Ministry of Culture, Education, and Religious Affairs, The Archaeological Museum of Herakleion.