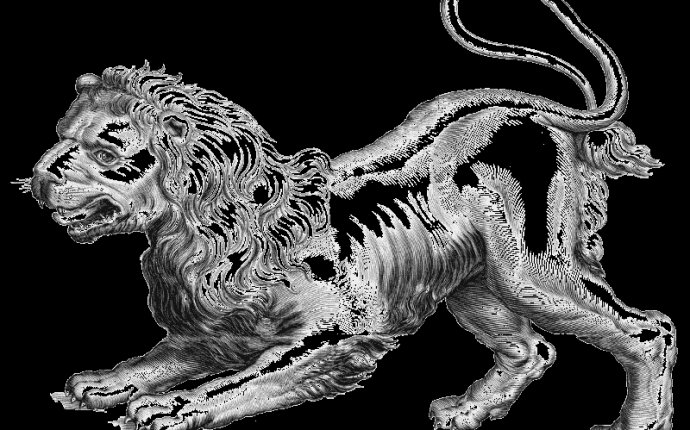 Usually represented as a serpent, he presided over the Delphic oracle. Unfortunately he became enemies with the Olympian deity Apollos who ended up killing him and taking the oracle for himself.

A two headed dog tasked with guarding a huge herd of red cattle, he was killed by Hercules who then kept all the cattle as proof of his victory.

These were a pair of centaurine sea-gods with the upper body of a man, the lower front of a horse, and the tail of a fish. They were set in the sky as the astronomical constellation Pisces.

Scylla was a monster that lived on one side of a narrow channel of water, opposite its counterpart Charybdis. The two sides of the strait were within an arrow’s range of each other—so close that sailors attempting to avoid Charybdis would pass too close to Scylla with disastrous results.

Known as the “Father of All Monsters”, Typhon was believed to be the most deadly monster of Greek mythology. His human upper half supposedly reached as high as the stars, and his hands reached east and west. Instead of a human head, a hundred dragon heads erupted from his neck and shoulders.

Ophiotaurus was a creature that was part bull and part serpent. It’s entrails were said to grant the power to defeat the gods to whoever burned them.

Lamia was apparently a beautiful queen of Libya who became a child-eating daemon. In the myth, she is a mistress of the god Zeus, causing Zeus’ jealous wife, Hera, to kill all of Lamia’s children (except for Scylla, who is herself cursed) and transforms her into a monster that hunts and devours the children of others.

The Graeae were three sisters who shared one eye and one tooth among them. Not surprisingly they weren’t known for their beauty.

Half woman half snake, Echidna known as the “Mother of All Monsters” because most of the monsters in Greek mythology were her offspring.

The Nemean lion was a vicious monster in Greek mythology that lived at Nemea. It was eventually killed by Heracles. It could not be killed with mortal weapons because its golden fur was impervious to attack. Its claws were sharper than mortal swords and could cut through any armor.

With the haunches of a lion, the wings of a great bird, and the face of a woman, she is mythicised as treacherous and merciless. Those who cannot answer her riddle suffer a fate typical in such mythological stories, as they are killed and eaten by this ravenous monster.

Literally translated to the ”the avengers” from Greek, these were known as the female deities of vengeance. A formulaic oath in the Iliad invokes them as “those who beneath the earth punish whosoever has sworn a false oath”.

The daughter of Poseidon and Gaia; Charybdis is a huge bladder of a creature whose face is all mouth and whose arms and legs are flippers. She swallows huge amounts of water three times a day, before belching it back out again, creating large whirlpools capable of sinking large ships.

These winged spirits whose name literally means: “that which snatches” are known for their proclivity for stealing food. In fact, Zeus used them to punish a king called Phineus by trapping him on an island with a bunch of food and a large group of harpies. Phineus was constantly tortured by a buffet he could never eat because it always got stolen away.

Satyrs have goat-like features such as hindquarters and horns and are often depicted playing flutes and holding cups of wine. They epitomize the essence of having a carefree life as they make music and drink all they want.

Dangerous and beautiful creatures, they were often portrayed as femme fatales who lured nearby sailors with their enchanting voices to shipwreck on the rocky coast of their island.

The Griffin is a legendary creature with the body, tail, and back legs of a lion; the head and wings of an eagle; and an eagle’s talons as its front feet. As the lion was traditionally considered the king of the beasts and the eagle was the king of the birds, the griffin was thought to be an especially powerful and majestic creature.

The Chimera was a monstrous fire-breathing female creature of Lycia in Asia Minor who was composed of the parts of three animals; a lion, a snake and a goat. The term chimera has come to describe any mythical or fictional animal with parts taken from various animals, or to describe concepts perceived as wildly imaginative or implausible.

A multi-headed dog, or “hellhound”, Cerberus guards the gates of the Underworld to prevent those who have crossed the river Styx from ever escaping.

A member of a primordial race of giants, each with a single eye in the middle of the forehead, the name is widely thought to mean “circle-eyed”.

The Hydra was an ancient serpent-like water beast with reptilian traits that possessed many heads — the poets mention more heads than the vase-painters could paint, and for each head cut off it grew two more. It also had poisonous breath and blood so virulent even its tracks were deadly.

Perhaps the most popular gorgon in Greek mythology is Medusa, the only mortal among the three sisters who had snakes for hair and who’s gaze would turn anyone into stone. She was famously decapitated by Perseus who was armed with a mirror and scythe.

The centaur is a humanoid mythical creature with the head, arms, and torso of a human and the body and legs of a horse. Perhaps one of the most popular centaurs in Greek mythology is Chiron. He stands in contrast to the typical depiction of centaurs being indulgent and violent drinkers with his intelligence and enviable medical skills.

One of the best known creatures in Greek mythology, he is a winged divine stallion usually depicted as pure white in color. He is the offspring of Poseidon and Medusa and legend says every time his hoof hit the earth, a spring of water bubbled forth.

The Minotaur was a humanoid mythical creature with the head of a bull on the body of a man. He dwelt at the center of the Cretan Labyrinth, which was an elaborate maze designed by the architect Daedalus and his son Icarus. The bull-man was eventually slain by the Athenian hero Theseus.