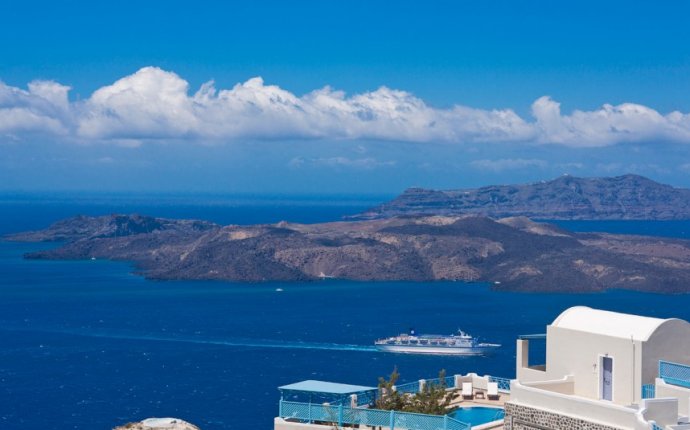 Greece: With the Kardashian family holidaying in the Greek islands, Mykonos and Santorini have become a favourite destination for the summer holidays Since the Kardashians island hopped through Greece in April during their annual family holiday, they have made the Greek islands the hottest destination for this summer. It was in Santorini and Mykonos where pregnant Kim Kardashian enjoyed her last holiday before becoming a mother to baby North West and where she revealed her growing baby bump for the first time.

Most recently, Modern Family star Sofia Vergara was also pictured in the island of Mykonos, currently the most popular of the Greek islands. There she celebrated her Emmy nomination whilst enjoying the sunny beaches and the pristine deep blue Aegean Sea.

With each of the Greek islands offering something different and unique, there's something to appeal to everyone, from those seeking secluded sandy shores and breathtaking sunsets to visitors searching for bustling night life and fine dining. HELLO! Online take a look at what two of the popular islands have to offer.

The perfect location to start an island hopping jaunt, Santorini, also known as Thira, is considered the diamond of the Greek Islands. Its whitewashed buildings with blue doors and picturesque blue-domed churches are nestled atop steep volcanic cliffs that fall sharply to the azure waters.

On offer are some of the most stunning beaches, unique due to their special geographical features. Red and black volcanic pebbles lay the shores of Santorini and steep cliffs complete the ambience. The most famous is the Red beach, while particularly popular are Perissa, Kamari and Perivolos.

Santorini, currently considered the fourth best island in the world, also offers the most breathtaking sunset in the world from the beautiful little town of Oia and it is a paradise for shoppers, photographers, artists and hikers.

Megalochori is located just six kilometres from the centre and is the most traditional village on the island. In the centre of this hidden treasure is the Vedema Resort, where stars such as Angelina Jolie, Heidi Klum and Lady Gaga have found tranquillity.

The Luxury Collection Resort is the perfect place to unwind. Sleek and spectacular, with unprecedented privacy, this 5-star hotel offers exceptional choices for stellar dinning, incredible views of nearby vineyards, a helicopter service and deluxe suites.

The hotel has several restaurants to choose from, such as the Pergola, located by the hotel’s pool, which offers unique Greek cuisine. Inside the premises is the Vinsanto Restaurant and Lounge, offering creative Greek cuisine.

For something completely bespoke, the hotel reserves a very special spot for the Prive Dining restaurant, which only hosts two people at a time and is the perfect choice for marriage proposals and anniversaries. It offers modern Greek cuisine and a private waiter completes the dining experience.

Mykonos is the most popular Island in the Aegean Sea and best known for its stylish nightlife.

During the day tourists lose themselves in the small narrow streets of the town where jewellery, clothes and souvenir shops are open past midnight. The port is also crowded during most of the day, with the famous pelicans showing up at lunch time.

At night time, visitors head to popular party destinations, such as Paradise Beach, where the fun continues until the early hours. Don’t forget to visit the famous windmills located near the Little Venice, a neighborhood replete with elegant and gorgeous old houses that are situated precariously on the edge of the sea. Rumour has it that Madonna owns one, although it is not known which is hers.