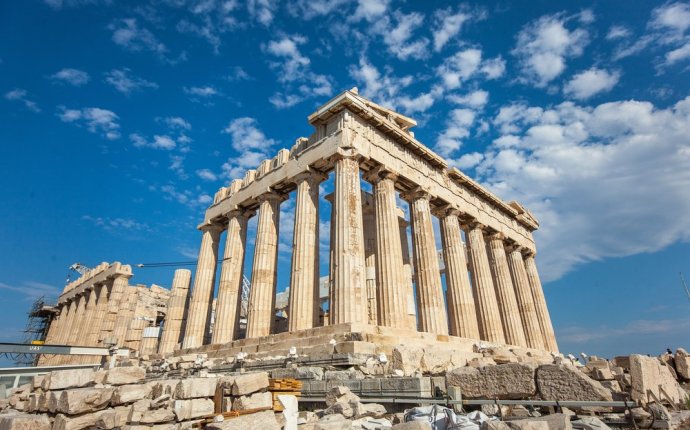 Temperatures in Athens, Greece, are pleasant no matter when you visit. (Photo: akropolis athens image by Christopher Ritsch from Fotolia.com )

Athens, Greece, has relatively mild weather, with the average daytime temperatures ranging from 52 degrees Fahrenheit in January to 92 degrees in August. The humidity does not add considerably to the heat you feel during the hottest days either. Combine mild temperatures with few rainy days, and you have pleasant vacation weather.

June through August are the peak temperature times in Athens. The average daytime high ranges from 85 degrees in June to 90 degrees in August, according to Weather.com. The low temperatures are 68 degrees in June to 72 degrees in August. Though July is the warmest month on average, August is a month when many Athenians get out of the city, according to Travelinfo.gr. The temperatures make the beaches of Greece a popular place to be. If you visit in the summer, make sure you rent a hotel room with air conditioning.

High humidity can make the temperatures seem much higher than they are. Humidity in Athens isn't typically high, so isn't usually a factor. May and October are considered moderate months with relative humidity 50 percent to 60 percent. June through September are considered medium months with, relative humidity 40 percent to 50 percent These percentages may mean you’ll feel the warmth of the day, but you shouldn’t be too uncomfortable. .

RT @KallergisK: "You arrive in #Athens, you take bus X95 to Syntagma sq & you land on rubbish. Live your myth in #Greece" - #Athens cleaner…