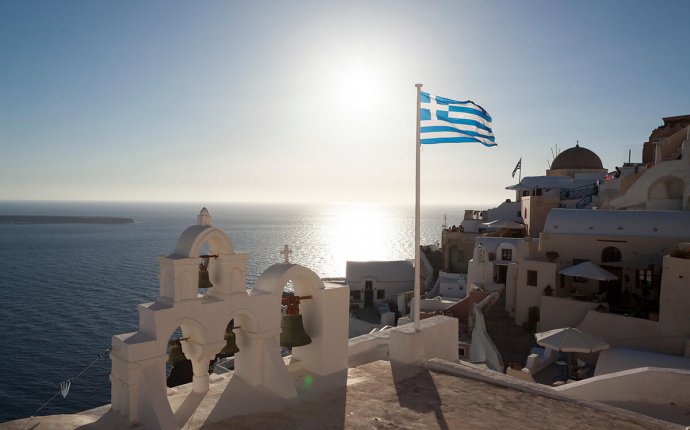 In Greece, the flag has two names -Η Γαλανόλευκη or Η Κυανόλευκη – translated as “The Blue and White” or “The Azure and White” in English. To the Greek people, however, this is more than just the official state flag. It’s a symbol of their national pride and of how far they’ve truly come since the Ottoman Occupation of Greece officially ended.

What the Greek Flag Represents

There is some lore that surrounds the meaning and symbolism behind the flag. The flag is also recognizable and distinct and represents certain aspects of Greek culture and history. The white cross in the upper quadrant of the flag represents Greek Orthodox Christianity, the religion that the majority of people in Greece practice. The nine blue and white stripes represents each syllable in the phrase, “Ελευθερία ή Θάνατος”, which means, “Freedom or Death” in English.

This was an important battle chant during the Greek War for Independence, which eventually led to the Ottoman Empire finally leaving Greece. However, another theory is that the nine stripes represent the nine muses from Greek Mythology. It is possible that the stripes could represent both! The blue and white colors themselves are said to represent the very contrast between the sky and sea of Greece.

Beginning of the Greek Flag

There are a few theories as to how the Greek Flag came about. The distinct elements that we talked about above can all be traced back to past elements of Greek History. For instance, the official flag of the Kallergis Family of Crete looks almost exactly the same as Greece’s flag. Was the Modern Greek Flag adapted because of this particular family? Since there aren’t any known records of exactly how the modern flag was adopted, it’s difficult to know why, exactly, the flag looks the way it does today.

Most people don’t realize that the current Greek flag wasn’t officially adopted until December 22, 1978. Prior to that, the flag has had several designs with a few similarities. Prior to 1978, the flag may or may not have contained the signature stripes and maybe would have only contained the white cross with the blue background. When King Otto from Bavaria was in power, he added his family’s coat of arms to the flag. After he was no longer in power, the flag changed again.

Despite the fact that it was so recent, there doesn’t appear to be much official information as to why that particular design is the one that became the official design. There’s only speculation – but perhaps that’s part of the lore of the flag itself? In a lot of ways, the multiple designs that the Greek flag has had since the Greek War of Independence is a reflection on the changing nature of Modern Greek History.

As you can see, the Greek Flag is a distinct part of the nation. Although the official design wasn’t adopted until 1978, Greece never seemed to be without a flag or some kind.