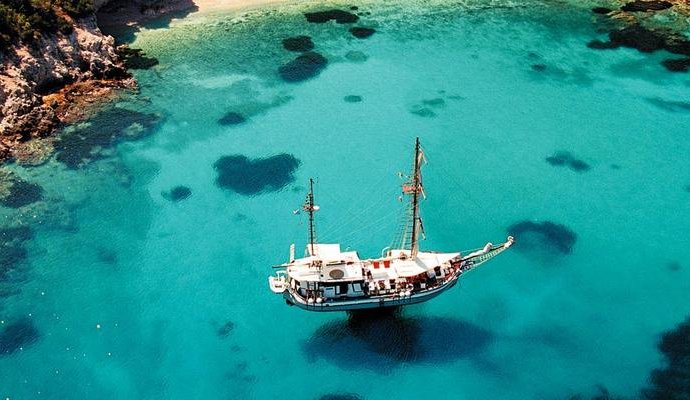 Lefkas, also known as Lefkada, is only just an island. once joined to the mainland, the Corinthians dug a canal in the 6th century BC. Now a swing-bridge links the two again, which means that on Lefkas you have all the benefits of an island atmosphere together with access to some of the most beautiful parts of western Greece.

The east coast is sheltered, pretty and shingly, with pine and olive trees to the water’s edge. there are good views too, across to the mainland or the four prince’s islets in the strait.

The west coast is very different – rugged and open, with sheer white cliffs towering above an azure sea and fabulous beaches, some only reached by boat. The mountainous interior is delightfully green
with many working villages to explore. Some, such as Karia, are known for their traditional crafts (in this case embroidery). All can be easily reached by car.

Lefkas is noted for its wine, and an annual festival of folk dancing, held in august. There is plenty to do on Lefkas. A good excursion programme includes boat trips to the island of Meganissi and around the pretty prince's islands just offshore (including well known Skorpios), the famous beach of porto Katsiki, and (by coach) around-the-island. You can rent a mountain bike, a small motor boat, even learn to sail a yacht.

They say aphrodite was born here; Sappho leapt to her death on Lefkas; and one German archaeologist, having uncovered the remnants of a city dating back to 2000 BC, spent the rest of his days trying to prove that Lefkas was the ithaca of the odyssey, and that Homer had it wrong all along! For more visible remains it is best to take a car and go to the mainland – perhaps to Nikopolis, a vast roman city only partly excavated just to the north of preveza; or even to Delphi, although we recommend an overnight stay here.

As with all ionian islands, Lefkas is busy in August. Nevertheless, there are not many Greek islands which have (in effect) direct flights, and yet which have retained their traditions and character to such an extent as Lefkas.