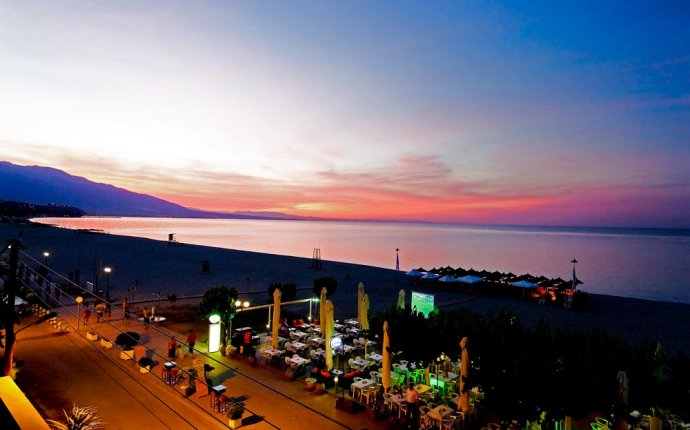 HOTEL ERATO is situated at Olympic Beach in a popular tourist area at the Olympic Riviera, which can provide all the necessary comforts for an enjoyable and relaxing holiday. In the surrounding you will find night clubs, cafes, restaurants and lots of possibilities for sports activities. Olympic Beach is situated closely to Mount Olympus, the highest and most famous mountain of Greece.

ATHENS - capital city of Greece, cradle of the European culture. Early in the morning we will come to Pireus - the biggest port on the Mediterranean Sea. We will travel by streets of the Athens and we will examine the Olympic Kalimarmaro Stadium, where the first Olympic Games of the modern era were held, also Hadriana Bow, Athenian Triptych and next we will tour the Acropolis with Partenonem, the Theatre of Dionysus, Erechtejon and the Odeon of Herodos Attikus.

We will also see Areopagus, Greek Agora, Hadrian Library, Forum Romanum. We will go with picturesque Plaka small streets up to the Parliament to see the changing of the guard of Guardsmen - Evzones by the Tomb of the Unknown Soldier. On the way back we will pay homage to Leonidas and 300 Spartans In Termopile.

The METEORA - suspended in the air" or "in the heavens above" - etymologically related to "Meteorite" is one of the largest and most important complexes of Greek Ortodox monasteries in Greece, second only to Mount Athos. The six monasteries are built on natural sandstone rock pillars, at the northwestern edge of the Plain of Thessaly near the Pineios river and Pindus Mountains, in central Greece. The nearest town is Kalambaka. The Metéora is included on the UNESCO. We will stay in the Kalambaka- small town, where in the studio of icons we will get acquainted with the technique of writing icons. We will visit two monasteries, where we will be admiring beautiful icons, murals, old manuscripts. We will examine remaining monasteries from the deck of the coach and sights.

On the way back we will stay in the Tempi Valley eulogised by poets, where we will visit the small church St.Paraskievi which is a patron of blinds.

SKIATHOS - very beautiful green island of the Sporad archipelag, where azure waves of the Aegean Sea are breaking against sandy and rocky beaches. The route of our trip is leading along the Pilion peninsula and the Evia island. Pilion is a land inhabited in ancient times through of Centaurs, from here Jazon set off with Argonauts to the quest for the Golden Fleece. We will come to the capital city of the island Skiathos- of picturesque small town with white houses and blue shutters and very beautiful flowers. We will visit the Clock Hill with the small church St.Nicolas, from which the superb view on the port stretches and the small town. In the program also we have a time for the rest is sands on the very beautiful Kukunaries beach with gold sand.