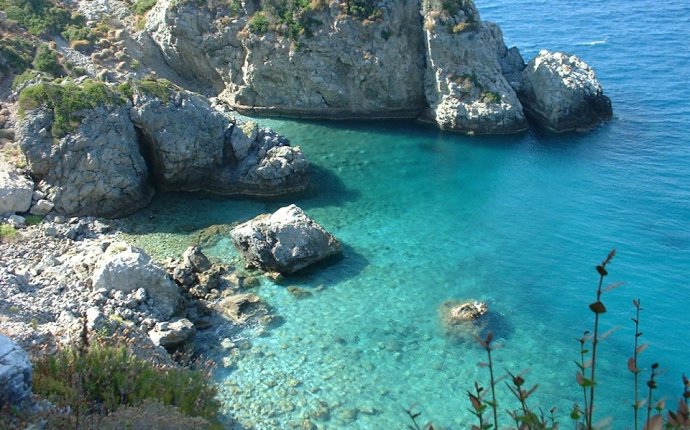 There are 587 steps rising from Skala, the minuscule old port of Santorini, to Thira, the clifftop capital of the most spectacular of Greece's 6000 islands. And I know, because I'm counting each one.

Of course you can catch the cable car up – as most of my fellow cruise ship passengers are doing. Or you can ride one of a hundred docile donkeys to the summit – provided you're prepared to smell like an ass.

Then again, like me, you can struggle up the steps in the 26-degree heat of the October sun because you want to savour Santorini's truly unforgettable harbour.

No other volcanic creation on earth can match Santorini for sheer beauty. Here, on this stairway, you witness the remains of an enormous eruption 3600 years ago when the centre of the island collapsed thousands of metres into the sea, creating a vast, picturesque caldera protected from the Aegean on three sides by the 300-metre high cliffs of the main croissant-shaped island (also called Thira).

That catastrophic explosion – and the tsunami it provoked – is widely credited with wiping out the Minoan civilisation on Crete. It also created a Greek version of Pompeii. Excavations at Akrotiri since 1967 have revealed a large Minoan town entombed in the solidified ash, enhancing Santorini's links with the legend of Atlantis.

With all this, no wonder Santorini often appears in the top five when lists are made of the best islands in the world to visit.

And yet, as I climb those 587 steps my eyes are constantly diverted from the view. A hundred donkeys don't tread up and down this switchback path every day without leaving piles of donkey manure...

Still the strenuous 15-minute climb is rewarded when you reach the first of the white-washed houses and shops that cling to the rim of the old crater.

Most cruise visitors are happy to spend their time in Thira. It's a photogenic town, with a warren of cobbled streets containing hundreds of restaurants and shops to keep you entertained. It also has two cathedrals – one Greek Orthodox, one Catholic – and an archaeological museum well worth visiting.

But the famous blue-domed churches of Oia, the island's oldest surviving settlement, are Santorini's most famous postcard shot. So I catch the public bus (Euro 1.80 each way) for the 20-minute ride to Oia.

If there's a more captivating short public bus ride costing less that $5 anywhere in the world, please let me know.

Most of journey is spent on "the back side" of the island – what remains of the volcano's cone-shaped slopes, sweeping down to Santorini's famous volcanic beaches, made of black sand like Perissa and Perivolos or red sand such as Red Beach.

Some of the hundreds of stairs that connect Fira village with, Gyalos, the old port of Santorini island, Cyclades. Photo: Alamy

The bus journey also reveals a series of abandoned agricultural terraces. Only later do I discover they're called pezoules, and that they're part of the evidence that Santorini is the oldest, continuously cultivated wine producing district in the world, dating back to 3500BC.

Today there are ten wineries on the island, which all boast of their distinctive "terroir" (rocky volcanic soil, little water) which they attribute to the volcanic explosion around 1600 BC.

Oia is even prettier than Thira, with a classier range of shops, galleries and restaurants.

The black sand beaches with umbrellas and lounge chairs in Kamari on the Greek Island of Santorini. Photo: Alamy

I choose to have lunch at Scala, which has a large terrace with striking views of part of the village and the beautiful lagoon.

I ask for a Santorini salad, a combination of cherry tomatoes, capers, anchovies, capers and local hard cheese – usually kefalotiri, a hard yellow cheese made either from goat's or sheep milk, or kefalograviera, a nutty sheep's milk.

But my waiter tells it's unavailable, even though it is listed on the menu. Why?

"Any restaurant in Oia that serves you a Santorini salad in October is tricking you, " he says. "Cherry tomatoes aren't in season in Santorini. So they will be using Italian tomatoes, and that's not a Santorini salad."

Fair enough. I'm pleased he told me – it shows he cares about the food I'm about to be served.

So I order a Greek salad instead. This version contains raw onions, fat green olives, green peppers, cucumber, capers, fresh (non cherry) tomatoes and a big block of feta with a covering of olive oil and fresh herbs.

The whitewashed houses in Santorini are in complete harmony with its volvanic scenery. Photo: iStock

As I'm waiting for it to be delivered, a conga-line of donkeys makes its way down the stairway to collect more tourists from Armeni, Oia's small port located some 300 metres below.

It's an omen! The Santorini Brewing Company is one of the most celebrated micro breweries in Greece. So I order a Yellow Donkey lager to go with my Greek salad.