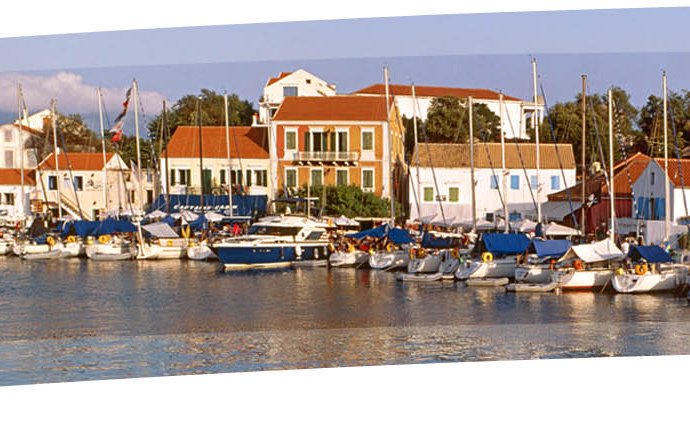 Part of the original seven Ionian Islands, Kythira lies near the southern tip of the Peloponnese peninsula. Over the island’s long history, its strategic maritime location attracted seafaring merchants and conquerors from all over the known world, resulting in a culture that is more varied than other Ionian Islands. From 13th-century Byzantine frescoes found on the walls of a cave in Mylopotamos to Minoan bronze idols unearthed on atop the mountain of St. George, the island’s archeological treasures reflect the island’s cultural diversity. In addition to Kythira’s beautiful beaches, the Mills region in Mylopotamos with its watermills and ponds is well worth exploring as well.

One of the smallest of the Ionian Islands, Paxi is just 13 km (8 miles) in length and can only be reached by boat, which makes the island a popular stopping point for yachts. Also known as Paxos or Paxoi, Paxi draws visitors looking for a more exclusive vacation experience, and with its luxury resorts and boutique shops, the island has plenty of attractions to delight even the most cosmopolitan traveler. There are gorgeous beaches to enjoy in Paxi too, and the south coast features around 40 sea caves to explore. The ancient Venetian fortress of Agios Nikolaos is also worth a visit.

Surrounded by two dozen islets, Lefkada connects to the Mainland of Greece by a floating pontoon bridge and a long causeway. The easily accessible island is a popular vacation destination, offering visitors an array of recreational, natural and cultural attractions. The island’s west side has the best beaches while the windy south is a favorite spot for kite surfing and paragliding. The town of Lefkada features the island’s most interesting cultural institutions, which include the 12th-century fort Agia Mavra and the Charamogleious Eidiki Lefkadiaki Library.

The Archeological Museum features an impressive collection of artifacts dating from the Paleolithic Era to the 4th century A.D.

Forever linked to Homer’s tale of Odysseus, Ithaki, also known as Ithaca or h, is considered the home island of the famous Greek hero. Some of the sights mentioned in the ancient folklore, including the Arethoussa Spring and Cave of the Nymphs, are within walking distance of the capital city of Vathy.

Vathy is home to most of the island’s best cultural attractions too, including the Folklore and Maritime Museum, the Archaeological Museum and the cathedral of Panaghia, which boasts a Crucifixion icon believed to have been crafted by Spanish Renaissance painter El Greco.

Also known as Cephalonia, Kefalonia is the largest of Ionian Islands and one of the most scenic. The island’s capital city Argostoli stands like an amphitheater overlooking the Koutavous lagoon, a nature reserve that is both a stopping point for migratory birds and Loggerhead turtles. The Melissani Lake cavern near the island’s main port, Sami, is a must-see natural attraction. Once a place of worship for the god Pan, the lake is fed by seawater flowing in underground from the opposite side of the island. Encircled by mountains, Sami Beach is worth a visit as well. The pretty white-stone beach is also less crowded than the more popular Myrtos Beach on the island’s west coast.