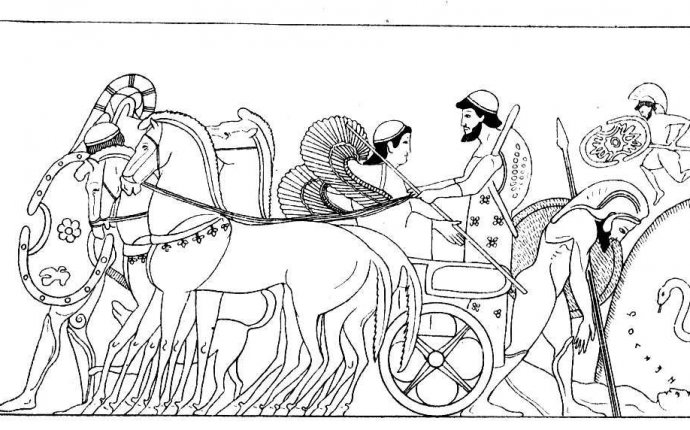 Compare and Contrast Greece and Rome

The Doryphoros; Hellenistic-Roman copy after the original statue by Polykleitos (circa 465- 417 B.C.). DEA / G. NIMATALLAH/Getty Images

andGreek art is considered superior to the "merely" imitative or decorative Roman art; indeed much art we think of as Greek is actually a Roman copy of a Greek original. It is often pointed out that the goal of the classical Greek sculptors was to produce an ideal artistic form, whereas the goal of Roman artists was to produce realistic portraits, often for decoration. This is an obvious oversimplification.

Not all Roman art imitated the Greek forms and not all Greek art looks terribly realistic or impractical. Much Greek art adorned utilitarian objects, just as Roman art adorned the living spaces. Greek art is divided into the Mycenaean, geometric, archaic, and Hellenistic periods, in addition to its acme in the Classical period. During the Hellenistic period, there was demand for copies of earlier art, and so it too can be described as imitative.

We typically associate sculptures like the Venus de Milo with Greece, and mosaics and frescoes (wall paintings) with Rome. Of course, the masters of both cultures worked on various mediums beyond these.Greek pottery, for instance, was a popular import in Italy.

The economy of ancient cultures, including both Greece and Rome, were based on agriculture. Greeks ideally lived on small self-sufficient wheat-producing farms, but bad agricultural practices made many households incapable of feeding themselves. Big estates took over, producing wine and olive oil, which were also the chief exports of the Romans—not too surprisingly, given their shared geographical conditions and the popularity of these two necessities.

The Romans, who imported their wheat and annexed provinces that could provide them with this all-important staple, also farmed, but they also engaged in trade. (It is thought that the Greeks considered trade degrading.) As Rome developed into an urban center, writers compared the simplicity/boorishness/moral high ground of the country's pastoral/farming life, with the politically charged, trade-based life of a city-center dweller.

Manufacturing was also an urban occupation.

Both Greece and Rome worked mines. While Greece also had slaves, the economy of Rome was dependent on slave labor from the expansion until the late Empire.

Both cultures had coinage. Rome debased its currency to fund the Empire.

The social classes of Greece and Rome changed over time, but the basic divisions of early Athens and Rome consisted of free and freedmen, slaves, foreigners, and women. Only some of these groups were counted as citizens.

In Athens, according to the literature of stereotypes, women were valued for abstaining from gossip, for managing the household, and, most of all, for producing legitimate children. The aristocratic woman was secluded in the women's quarter and had to be accompanied in public places. She could own, but not sell her property. The Athenian woman was subject to her father, and even after marriage, he could ask for her return.

The Athenian woman was not a citizen.

The Roman woman was legally subject to the pater familias, whether the dominant male in her household of birth or the household of her husband. She could own and dispose of property and go about as she wished. From epigraphy, we read that a Roman woman was valued for piety, modesty, maintenance of harmony, and being a one-man woman.

The Roman woman could be a Roman citizen.

The father of the family was dominant and could decide whether or not to keep a newborn child. The paterfamilias was the Roman head of the household. Adult sons with families of their own were still subject to their own father if he was the paterfamilias. In the Greek family, or oikos, household, the situation was more what we consider the nuclear family normal. Sons could legally challenge the competence of their fathers.

Originally, kings ruled Athens; then an oligarchy (rule by the few), and then democracy (voting by the citizens). City-states joined together to form leagues that came into conflict, weakening Greece and leading to its conquest by the Macedonian kings and later, the Roman Empire.

Kings also originally governed Rome. Then Rome, observing what was happening elsewhere in the world, eliminated them. It established a mixed Republican form of government, combining elements of democracy, oligarchy, and monarchy, In time, rule by one returned to Rome, but in a new, initially, constitutionally sanctioned form that we know as Roman emperors. The Roman Empire split apart, and, in the West, eventually reverted to small kingdoms.